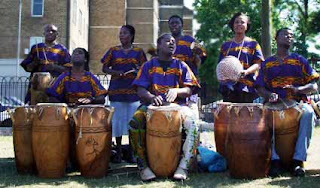 In an ordinary community hall
In the south-central section of the city
On one of the longest days of the year
They gathered.

We were raising money for a drought and poverty-stricken
Hospital in Western Ghana, and doing it in styleic

To say the hall was filled to overflowing
Would not be an exaggeration—but the real
Fulfillment came from the sound ...
As a little-travelled Canadian white woman
My understanding of African drumming
Was pretty much limited to what I saw on TV

And in movies from Hollywood; even specials
On National Geographic did not do justice
To the splendour of real drumming
The likes of which we heard last night

First, one drummer would start and he alone
Would be powerful and loud and rhythmic
In ways that are hard to define,

It was not hard to imagine being in the jungle
In the dark around a fire, hearing the beat
Of these drums playing long into the night,
Or maybe for several days or nights

In fact, it's the opposite –that drums alone
Make such compelling music enthralls me
Thrills me, makes me want to move
As I noticed it did almost everyone
In attendance at this function

Yes, last night I heard Africa drumming
And began to understand her mystery
Just a little bit better and why
We need to keep trying with her;

Mama Africa, we hear you, we do

I found myself promising to try
Harder to help her and I will.