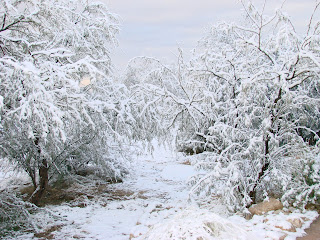 In the photo the girl is taking a picture
An old-fashioned camera held to her eye
And all about her a fairyland of crystal;
Trees, bushes, buildings outlined
Even in black and white, everything
Shimmers in the sunlight, everything
Glimmers and sparkles like crystal

The ice-storm came in the dark of night
With the winds high, howling wildly
And sleet sheeting down in copious amounts
The ice built up, layering the wood
Until its groans could be heard even
Over the storm’s cacophony – wood dying
Groans and moans deeply but in the end

Booms as loud as thunder when the ice
Takes its life – whether amputating limb
By large limb, or going right to the heart
And chopping it down at the trunk
Ultimately, the sound so like that of a rifle
Report ends with old growth forest being
Brought to its knees and no matter
How beautifully the storm dresses the result
The damage is fatal and irreparable