HONOURING THE DEAD AND ENCOUNTERS 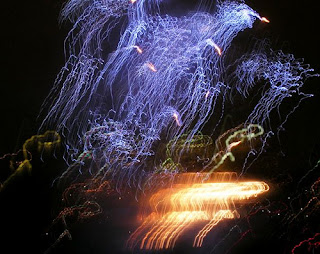 Parallel universes aligning ignoring the spot
On Venus purposely - to honour the master
Everything else mattered not, not even
The recently retired spectacular moon twirling
Uselessly in the pale used up sky reflecting
Upon itself ... rivalries great were set aside
So trivial hates would not be acknowledged
Even in passing as all gathered for this send off

In less time than one might think light travels
They assembled on the innermost edge of the known
Universes in as many deep as there are rings
Of some little or unknown planets, mostly the latter

Earthlings, busy with their own preparations
For the well-known personage were oblivious
To the ones amassing in great numbers just beyond
The beyond - they had little idea of what was coming

On the third night after the great man's death
All of the non-humans had arrived and were ready
To do their part - since forever they had known
Once he ceased to breathe, he desired to come to them
And now, they wanted nothing but to honour his wish

As soon as the moon acquiesced and went darker
Than dark, they spun the earth quiet, drifted inside
Acquired the corporeal human and his soul-self
Slipped back to the outer edges, realigned moon
Planets, earth and all else - bowed to enemies
And friends alike and ferried the master home

Earthlings awoke surprisingly refreshed for the memorial
Paid homage to the man at his closed casket service
Went back to their lives never realizing their close
Encounters with the three hundred trillion kinds ...