In the Style of Billy Collins they Said 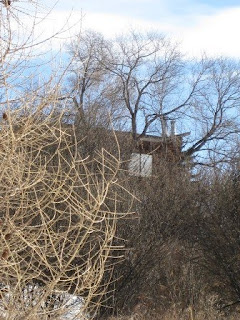 It's not really my thing I thought, to write poetry in some other poet's style...but Billy Collins...I love Billy Collins. This really might be fun I thought. And I even have pictures of the lake I'll be writing about. At least I think I do.
Well, even though I know I do have pictures of the lake, and recent ones at that - do you think I can lay my digits on them? Of course not...and I have much to do before I wing my way east early next week so will settle for this secretive looking cabin I snapped a shot of in the river valley here. I think it suit this poem also. At least it works for me and I guess at the core, that's really all that matters.

Before the moon is fully set each night at Belmont Lake
I stick silicone disks in my ears, then crawl off to bed and sleep
And, like a hibernating bear, I become deeply unconscious

My cottage country slumber is dreamless, and so deadening, I believe
Mario Puzo’s infamous horse head could be laid bloody on the pillow
Right next to me and still I would remain lost to Morpheus

I don’t know that you could make me an offer I couldn’t
Refuse, such is my love affair with somnolence while here
In this place, but I am hard-pressed to explain this odd devotion

Musing over my Cheerios my final morning at the lake, I wonder
If I’ve remembered to pack everything, especially those earplugs
And my DVD’s; I still think Godfather Two was the best of the bunch