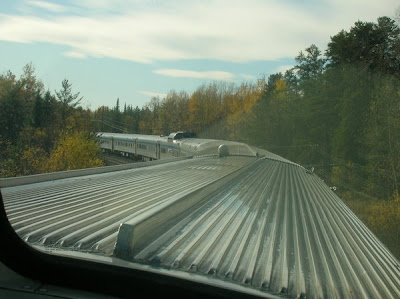 The snake gobbles up the track
As we serpentine our way
Across this vast country of ours
We’ve left the flatness of Manitoba
Finally and we’re in the dark woods
Of northern Ontario where there
Are canyons, unexpected walls
Of rock that hem the rails like
Natural tunnels; these are few
And not lengthy and broken by
So many lakes and rivers, most
Of which have never made it
On to any map or chart even now
In the twenty-first century

An old-timer in the observation car
Has filled me in about all the tiny
Un-named places we are passing
Where many of the country’s
So-called indigenous people still
Eke out a living, doing what they’ve
Always done; hunting, trapping
Fishing – if the water’s not bad
It’s hard to believe that lakes
That look so beautiful could be
Full of poison that kills fish or worse
Mutates them or kills people that
Catch and eat them, I shudder
Just thinking about it and he smiles
No doubt amused by my naiveté

On a train trip with my mother, I took this shot, and wrote this poem after talking to a native elder for a time. Every now and again I am reminded of what lies beneath so much beauty, and also of how much I enjoyed riding the serpent across the country. It's a wonderful way to travel.
Posted by S.E.Ingraham at 5:36 PM