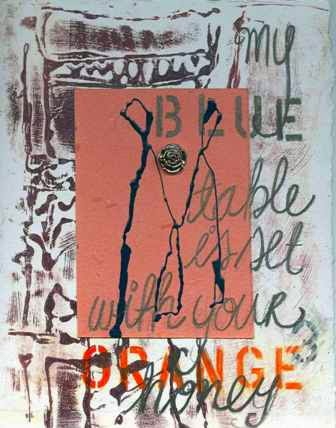 (all the prompts and exercises that led to this poem follow the poem...)

Finished, the day's deliberations as twilight turns
the sky a fulsome blush
Finished, the busyness of life as families flee home
for reconnection, peace
Finished, for the nonce, all strife mentioned;
now put away
Now is the time for recharging, reclaiming
that of you that needs rescuing
Remembering who it is you really are,
the why of you and what you do

Drink deep of dawn and slake sleep's left-over dreams.
Her world contained in one sparkling tear-drop reflected his.
Sometimes fishing brings the solitude found with singing sardines.
No sound is more needed than that of a baby's laugh.
Her writing spilled lines and letters like an overfull abecedarian's knapsack.
There is nothing so terrible as a wish become regret, once time beats a tick too fast.
For a cemetery, it was surprisingly filled with life, herds of jack-rabbits hopping everywhere.
She dangled from the overhang, hanging by the strap on her purse, finished.
It's not every day you hear your name mentioned in a valedictory speech and a eulogy almost simultaneously.
Those apostles, they had to be twelve, didn't they? A dozen - not a Baker's Dozen...a true dozen.
Is there anything as haunting as the call of the loon?
The bag tipped and soon there were oranges rolling every which way.

Exercise of the second part: take six of the words and write two lines with each of them. Two lines that work together. Use your word once, or twice (or three times if you can manage it artfully)

In her whole life, she had needed no-one and nothing; wanted nothing so much as not to be needed. Now, with a baby, hers alone it seemed - it was round the clock, twenty-four seven being needed.
He was surprised to find he was so old-school but the proof was in the hand-written letters, years of them bound with cross-grain ribbon. Love letters, pen-pal letters -- even copies of letters he'd written to buddies way back when...yep, old-school, for sure.
The man wondered if there was such a thing as a terrible-metre, some way to measure the degree of awful that was going on. He pictured a large thermometer-type gizmo with 9/ll being up near the high end of terrible and the Hindenburg being...hmm, he realized he didn't know where to put that burning ship, nor the Titanic, nor the paltry terrible that went on in everyday life.
There was life in the old wolf yet, she thought, watching her aging border-collie cross bound ahead through the blizzard. Wait up, she tried sending him telepathic messages, the life left in my legs is not quite as lively as yours seem to be...how that always led to thinking about life-span, she found herself musing.
Taking down trees was one of her least favourite tasks but she was almost finished with the weeping birch. Finished, was what it was, she found herself thinking as she cut up the branches...brittle and dead, ready to be burned in her fireplace come the winter.
Was it enough to be mentioned at the end of life, she wondered, sitting quietly in the half-empty church, listening to the eulogy for her friend. She guessed a heartfelt eulogy was more than a mention really but were any words enough?
Her mother was delighted when her brother was ordained; after all, he had the call, as she told anyone who would listen. "A calling, Mom," she couldn't help correcting her. "He has a calling...you make it sound like he keeps getting a telephone call."

Exercise of Third Part - If you have time for it: Use three words in a poem of six to ten lines (Finished the Day - the poem at the top is the answer to this exercise)