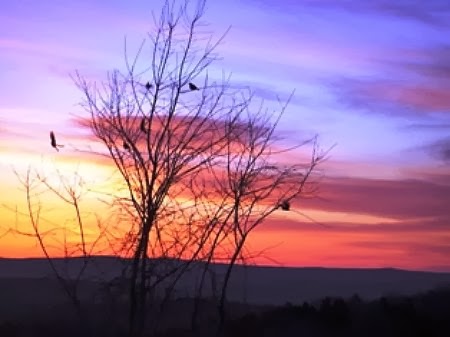 The caller was determined to die, he said
I knew there was some hope or he wouldn't have called
But thinking I had been where he was, I was cocky,
sure I could talk him out of it, talk him down, as it were
Little did I know that some pain is so unfathomable
There is no explaining it away, no putting word bandages on it
No making it alright, no matter how long you keep them on the line

He’d finally found his birth father he told me,
but he sounded so sad...
And that’s not a good thing because?
I tried to be gentle as I prodded, needing to keep
him talking, trying to find out where he was, get a fix
An inhuman sound came at me over the telephone line,
a wailing chuckle if you can imagine such a thing
– and then, in a voice as cold as autumn rain

He started to tell me his story, backwards, it seemed, but still,
“Do you believe in depression?”  He asked, trying to sound defensive and uncaring
both at the same time, no mean feat –
“Do you?” His voice is louder now...
I must not have answered...
“Yes – I do,” This was a no-brainer for me, depression and I were soul-mates.

“Well – this is beyond depression, I think,” He sounded very sure, resigned and cold.
“This is mind cancer. See – my theory is this – depression is just like cancer. No-one knows for sure what causes it; once you get it, you can get it again. And again. No-one knows for sure what helps it. They just experiment by putting chemicals in your head, or putting you in the hospital, or both. It’s like it goes into remission and then it recurs again and again. And let’s face it, for lots of us – it’s fatal. Like cancer.”
I’d never really thought about it like that...
“It’s an interesting theory,” I allowed as much, but, not wanting to let this end badly, quickly added, “But, like many cancers, it doesn't have to be fatal.”

“I know, I know...” He sounded so defeated now, so tired. “It’s just that sometimes, you learn things that make you want to just stop. You know? Just give it up?”
“What’s making you so sad this time Tomas?”
By now we were getting to know each other and starting to trust me, he’d confided his name.
“You don’t want to know!” His voice was filled with rage and pain and something indefinable.
“What if I'm just like him?” He sobbed. “What if I turn out to be just like him?”
“Like who? Your Dad?” I felt like the director of a bad play, but knew he needed to get it all out or he would just take the dive

“Yeah...” His whisper, so low, I had to strain to hear him now. “He died before I got to him, the bastard, rotted in jail the way he shoulda...”
“That must've been hard Tomas,” I tried to remain detached, matter-of-fact
“Did you know he was in jail, before you found him?”
“Oh yeah—Children’s Aid thought to tell me that—they just forgot to mention a few details...”
Bitterness so palpable it dripped like acid through the phone-lines, made me wince
“Details, huh? Want to tell me what they neglected to tell you Tomas?”
His laugh was not a real laugh but some mockery of one, a sound not easy on the ears
“You think you want to hear this, Miss Dial-A-Hope lady? Okay—listen up—you probably won’t hear this story every day.”
For almost a minute, the lines between us hum; I get ready to ask if he’s still there when he starts:

So—I get to the Max—and say who I am and who I'm there to see—well, they get all antsy, real nervous-like. Finally the warden comes out and shows me into his office, asks me do I want a coffee or pop or something. I'm thinking, what the hell, when finally the guy, really pretty nice if you like the army sergeant type, looks me square in the eyes and tells me my old man just kicked the bucket two days before I got there.
Can you beat that? All these years, I've put off looking for him cause every time I mention him, everybody got all excited and said, no don’t
Now – here I am, and he goes and dies –well shit – there you go

Would you like to have his possessions, the warden is asking me, since no one else has claimed them
Sure, why the hell not, he must have been quite a prince, I'm thinking – no one claimed the body or his stuff
They buried his ashes in the potter’s field at the back of the prison the guy says
Yeah, well – whatever –
It occurs to me that I don’t even know what my father was in prison for so I ask;
Not for the first time, the warden looks uncomfortable
“I thought you knew,” he says, running his finger inside his collar like suddenly
it’s too tight or something

“There’s no easy way to say this son,” he tells me, “So I'm going to just say it. He was in for murder.”
“Yeah? ” It doesn't matter. I mean, I didn't even know the guy – what’s it to me, eh?
“Who’d he off?” I was all nonchalant-like ‘til I notice the warden looks a little ill
“Who’d he kill?” My voice was loud in that office, demanding then. I knew I wasn't going to
like the answer
The warden coughed, looked out the window, then squared his shoulders and looked right at me again
I have to give the guy his props – he was a straight, square-on guy
“He killed your mother son, I'm sorry to tell you” he said gruffly, then hesitated as if debating whether to continue; I guess he figured I’d learn the truth sooner or later anyhow, so he went on

“He shot her while she was asleep in her bed with one of your sisters asleep in the bed right
beside her... If we still had the death penalty, by God, he would have been hung.”
All the air in that room was sucked out right then and I think the warden was maybe sucked out too – I don’t remember

When I came to, a white-capped nurse was bending over me, looking anxious; I heard her say
“How hard do you think he hit his head?” My head hurt like a bugger, I can tell you that
It hurt worse when everything came rushing back to me and I wondered if I’d dreamed
the whole miserable story
One glance at the warden and I knew it was no dream, no mere nightmare either

So, yeah – I guess you could say that’s the ballad of Tomas and his father

Pretty damn depressing, wouldn't you say? I thought I was sad before...
When my parents left (guess that’s a euphemism for died, and were incarcerated)
It turns out – when that happened, my brothers and sisters were all split up
My grandmother – Mom's Mom – wanted to take us all but Children’s Aid thought she was too old to take us all in and that it would be so much better to separate us and send us all
to different foster homes
And eventually adopt us all out – never telling any of us where the rest were,
effectively orphaning us all, in one fell swoop – hallelujah
I won’t bore you with our life stories but it’s enough to say I guess:
Two of my sisters have committed suicide and another has made attempts,
all of us have tried various illegal substances to an unhealthy degree,
I found everyone, incidentally – although as with dear old Dad – many were six feet under before reunification

So, it’s been nice talking to you lady – you’re a good listener you know?
But it’s getting chilly and I'm so tired; I know you've been trying to figure out where I am
so some well-meaning do-gooder can come and rescue me, but really?
It’s not what I want. No, I just needed to hear a friendly voice before I left,
tell somebody my story
Thank you sweet lady. Please don’t beat yourself up about this. There really isn't anything
you could have done.
You've been better to me than most

Oh look, the sun just broke through the clouds there, a last wink before setting
It’s beautiful really – I believe I’ll fly right into that opening in the sky.