Everything Old is New Again, or Not 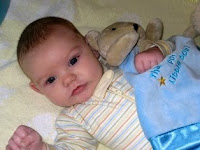 Yeah, well - here I go again...blogging. Still am not sure of the validity of this means of communication but do like to write and love my daughter's latest effort, "The Rumer Mill" so perhaps will become inspired. Also am quite impressed with my other daughter's friend's blog "Kimder" - her designs are marvellous, a real talent to be sure.
Oh - the reason for it all, at least for me, or one of them anyhow, is JACK RUMER - that's the little man in the picture featured here. Oh yeah...he's our first grandchild and he's perfect.
Can't believe that I haven't written anything on here since March...so much has changed.
The American President I was so bitterly complaining about back then has been replaced by the Democrat Barack Obama - the first Black President of the USA - he's still in the "proving ground" stage of his presidency but is a much needed improvement over the last regime. The fact that he can speak in whole sentences and make sense - that alone is so refreshing, I'm ready to give him the time he needs to work on the other grand messes.
And grand messes they are, no doubt about that.
The war continues to be a no-win situation as Obama tries to figure out how to withdraw American troops from both Iraq and Afghanistan in a timely fashion without losing too much face, or too many more lives. There has been much talk about how many improvements there have been made there, both to quality of life and in bringing democracy in - however, at what cost? And for how long? The Taliban and Al Quaida still thrive and have woven themselves in amongst the everyday people, ready to band together as soon as the troops depart...things will almost certainly return to the status quo sooner or later. And where is Osama Bin Laden? Not in custody, that's for damned sure.
I would write about the Canadian perspective on the pseudo-wars but we don't really have much of one. Harper seems to pretty much do what is expected of him by our neighbours to the south. True, we didn't go with them into Iraq, but we are "boots on the ground" militarially in Afghanistan, with the body-bags to show for it. What happened to our nation of peace-keepers and our reputation as same? Blown to bits along with the many IED's that keep taking our soldiers, I suppose.
Not sure why I'm off on such a rant again.
Could have something to do with the March for Peace and Nonviolence I took part in last Saturday with my family. It was wonderful to see the tens of Edmontonians that marched in the river valley and rallied at Hawreluk park for speeches and song - but, I found myself wondering if it makes any difference. Do the guns grow silent? Do the wars end? Does Peace stand a chance...
Posted by S.E.Ingraham at 9:02 PM