Snowboy - It's Winter Already - I Guess We're Due 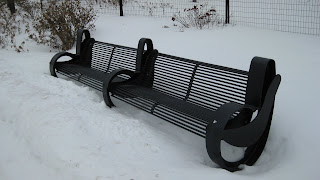 After Autumn being the non-event it was - I mean it - it was sweltering hot in September and part of October, then we had a couple of chilly rainy, windy days when the leaves were just starting to turn and then I think there was one really cold day with a very high wind and just like that, all the leaves were gone! - I felt totally robbed - even the sumacs on 97th barely got to blush before they turned to rust and were swept away...my favourite season and there was hardly a hint of it before it was just dull grey days. And now, it's snowing til hell wouldn't have it - honestly - it looks likes some insane wedding cake decorator got loose in the yards and has been using gobs of thick pure white icing liberally over every surface, finishing with great swirls and fancy twirls and peaks everywhere. It's - very pretty but oh-so-wintery.
Posted by S.E.Ingraham at 10:19 PM